You’re probably reading the title of this blog and thinking, “Moving my arms and legs could prevent me from getting dementia? You’re insane.” Well, that’s exactly what I’m telling you. Enhanced dementia and Alzheimer’s research reveals that learning new dance moves and choreography could prevent or elongate dementia. Here’s why:

According to the World Health Organization, “The number of people who will be affected by neurological disorders is expected to increase in the upcoming decades. There are issues with current surgical and pharmacological treatments, as well as conventional rehabilitative therapies, so new therapies are needed. Dance is seen as viable therapy because it simultaneously combines physical and cognitive stimulation, which could maximize its impact on neuroplasticity and cognition. So far, studies have examined the effects of dance in elderly individuals with dementia, including subjects with Alzheimer’s disease and those with confusion, disorientation, and memory loss.” (Orpen, 2016)

In 2003, the New England Journal of medicine did multiple studies and found that dancing CAN reduce the onset of dementia. This study went on for 21 years, evaluating hundreds of older adults, aged 75 and up. The researchers studied each individual for an extended period of time – taking note to their physical and cognitive brain stimulation while completing the following activities: reading, writing, crossword puzzles, playing cards, playing musical instruments, dancing, walking, tennis, swimming and golf.

“Surprisingly, dance was the one activity that was good for the mind, significantly reducing dementia risk. Regular dancing reduced the risk of dementia by 76%, twice as much as reading. Doing crossword puzzles at least four days a week reduced the risk by 47%, while cycling and swimming offered no benefit at all.” (Orpen, 2016)

Here at Azura, our Quality of Life coordinators/directors do “Move and Groove” with our residents daily as their morning exercise. We learn new choreography, and have options for those in a wheelchair or those who are ambulatory! In fact, we took special notice to one of our residents at Azura of Fox Point, Judy Brannon, whos highlight of her day was getting to dance in the morning with her neighbors. She picked up on choreography quickly, and even helped other residents learn the dance!

As a part of our MOSAIC dreams program, we started working on fulfilling Judy’s dream, which was to dance for the Milwaukee Bucks, her favorite sports team.

On Tuesday, March 29th, the Bucks Grand Dancers came to our home to not only put on a show for Judy, but also let her dance with them in a few of their routines! They actually were so impressed by Judy’s moves when we were organizing this, that they offered her to join them at Fiserv Forum for a REAL show! 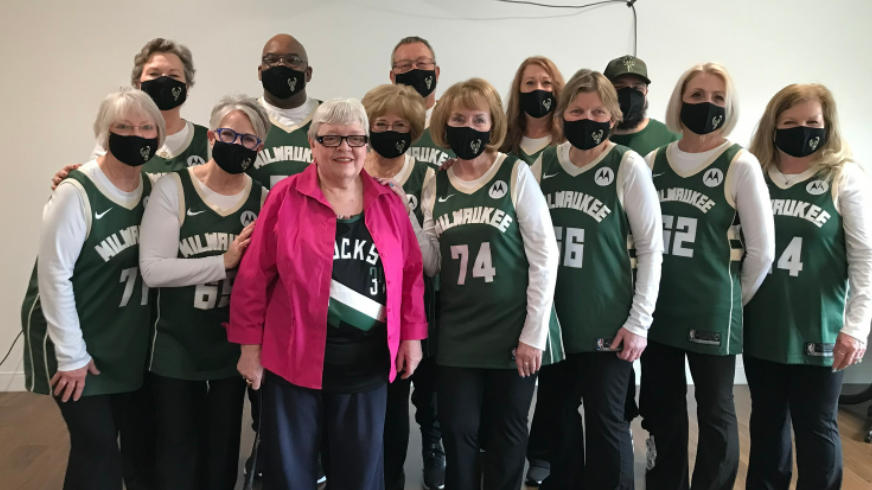 Judy’s family quoted, “I did notice the beautiful change in Judy from this experience, she was back to her happy and relaxed self.  I also noticed her memory seemed improved.”

To watch the news story covered by CBS10, click here!

“The field of dance research in the elderly is relatively young and continues to evolve. A study published in BMC Geriatrics, found that a dance video game, which combined physical and cognitive training, was more beneficial in improving walking accuracy and pace in older adults than muscle strengthening exercises alone.” (Orpen, 2016).

If dancing can keep my body AND brain healthy, I guess I’ll be seeing you at the dance studio.

We'd Love To Hear From You

My father has been here only a little over 2 months. The positive change in him has been DRAMATIC! I would HIGHLY recommend Azura........ I would give it 10 stars if they allowed it! This is the premier facility for any family member with cognitive issues! They do treat residents like family, believe it!

The staff at Oak Creek are all fabulous! It takes special people to care for our loved ones. If has been a trying year for all and the staff at oak creek get a shout out for their kindness and compassion they give to my mom and the others. They have all gone above and beyond to make things seem as normal as possible for my mom! All of the staff have been so helpful and kind! They are all fabulous!!

Azura memory care enhances the quality of life of each resident! Their activity department goes above and beyond to provide the perfect themes and topics geared to each residents specific likes. They do a wonderful job creating theme weeks and transitioning Azura with amazing decorations, to make them feel like they are their. One theme was France, they made a gondola had the residents and staff dress up and enjoy French cuisine. They really make your loved one feel special and included. Love seeing all the laughter and smiling faces:)

We want to thank you for the loving special care you took of our mother, Diane. It was truly mom's home and you all became part of our family. Everything was home for her....from the beautiful rooms, large sunny windows all around, good food made with love, fun and personal activities from people who really loved our mom. We would highly recommend your facility to anyone. The staff from the director, to the doctor, to the nurse, to the caregivers and the maintenance man were all extremely helpful, caring, loving and professional. There are not enough words to say how much we appreciate all of you. Your exceptional care, kindness, and love were beyond anything we could have imagined. You were part of our family, and we will miss you.

Just moved my sister-in-law to Azura Stoughton on February 12th. I feel like I’ve found a little piece of dementia heaven. The staff has gone way beyond my expectations to meet her needs and take time to know her. Anyone who has dementia deserves the TLC they receive at Azura. I’m so impressed.

Thank you to the Azura Memory Care team, Sheboygan location for the amazing, loving care they provided my dad. They truly loved and cared for my dad as if he was their own. It is such a warm, loving, family environment I only wish we would have moved my dad there years earlier!

I have enjoyed working with patients at Azura Care as a Physical Therapist Assistant. The staff has been very helpful in sharing important information about the patients to make their therapy sessions as productive as possible. They are open to learning techniques to help keep patients safe and improve their ability to perform daily tasks with less assistance. Their interactions with patients show caring and compassion with a focus on the needs of each individual to enjoy the best quality of life possible.

The journey of caregiving for my Aunt started over 4 years ago. It has been a very long difficult journey. It is hard to watch and frustrating to watch a loved one decline, as well as for them to live the decline. My Aunt found her final peace at Azura Memory Care in Sheboygan. It was not only her peace but mine as well. I no longer had to worry about her care as I could see that she was loved by her Azura family. She passed away on June 21 and they knew how important that it was for me to be there, but I also found peace that if I was not there, she was with family that loved her. No words can express the appreciation for the care, compassion and love that they have for all their residents. God has opened many doors through my journey and the doors at Azura were truly a gift from God. This family made a difference in a long journey. I will always have them in my thoughts and prayers. They are where and doing what they are meant to do!